Workshop for “COSMOS” Project Under the Seventh Framework Programme of the EC, Partner and Participant in Which is ReSAC, Was Held in Rome, Italy 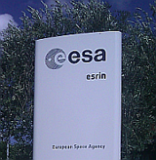 From 24th to 26th of October 2011, another workshop for “COSMOS” - Cooperation of Space NCPs as a Means to Optimise Services Project under the Seventh Framework Programme of the EC, partner and participant in which is ReSAC, was held in Rome, Italy. The main task of the participants was to exchange information about the current project results and to outline the future tasks, related to the final conference for the “COSMOS” Project, which will be held on 28th – 29th of February 2012. The runtime of the Project is 1st of June 2008 – 31st of May 2011.

The participants visited the Institute for Research of the European Space Agency in Frascati (ESA-ESRIN), where some reports related to the Earth Observation Programme and risk management, as well as the International Charter on Space and Major Disasters, was presented.

In the end of the workshop, a visit of a factory for equipment of Ariane – booster of ESA, made by AVIO at Colleferro - was organized. The participants were familiar with the technology and industrial process and access to all halls was provided.

Visit of ReSAC Experts in the Institute for Environment and Sustainability (IES) of the Joint Research Centre of the European Commission – JRC, Ispra, Italy

On 21st of October 2011, a technical meeting between experts from MARS Unit at IES and ReSAC was held in JRC, Ispra, Italy. ReSAC presented their activities in the subjects, which were of interest for feasible collaboration between the two organizations.

The meeting agenda consisted of 3 topics:

On 20th to 21th of October the workshop was organized by Laboratory of Forest Management and Remote Sensing, Faculty of Forestry and Natural Environment, Aristotle University of Thessaloniki in collaboration with the Joint Research Centre of the European Commission and the University of Alcala. The main subject of the workshop was the operational use of remote sensing in forest fire management, paper contributions were focused on local to global RS and GIS applications on:

The poster represented the combination of different data source such as satellite images as reference, post event images and vector data – Forest management plans to assess the damaged forest vegetation type in burned area. Main interest in the poster discussion was related to methods for determining the different types of fire (surface and crown fire).

The intended efforts of different software developed recently to be integrated with the EUFODOS conceptual objectives, needed to be shared with the project partners.

Remote Sensing Application Center - ReSAC as a partner of the project were presented of three young experts.

The discussion was spread to the exercising the newest approaches to gain valuable results for the forest parameters, land cover classification and other.

ReSAC Activity in the Preliminary Flood Risk Assessment in Bulgaria

The task of the contract is to consult the institution in preparing the preliminary assessment of the flood risk, in reference to the Directive 2007/60/EC for flood risk estimate and management that entered into force on the 26th of November in 2007.
The first step in preparation of the management plans is a preliminary assessment of flood risk. It does include description of floods, occurred in the past, with significant disadvantageous impacts on human health, environment, cultural heritage, technical infrastructure and economic activities, which can be expected to occur in the future.

Besides the conclusions of the preliminary assessment of the flood risk along with maps of area with possible flood risk including maps under current flood risk, the Management plans regarding the flood risk in the Danube region will contain a description of the purposes of flood risk management, and short performance of the measurements for achieving the related purposes.

After the Water Amendment Act, the Basin Directorates to the Ministry of Environment and Water will prepare Management plans of flood risk. With these amendments, the aim is to create conditions to prevent or reduce harmful effects on human life and health, environment, cultural heritage and economic activities, related to the harmful effects of water.

During contract implementation, not only the requirements of the European and National legislation will be followed, but the documentary of ICPDR and the results of the project „Danube Floodrisk“ also. The collected data and analysis, will be used in the Danube strategy in terms of its further development.

The main goal of the summer school was to acquire knowledge on current use of EO data and image information mining techniques contributing to prevent, monitor and assess the impact of natural and man-made disasters and crisis situations

Main discussion was focused on the usage and interpretation of synthetic aperture radar (SAR) imageries, advanced InSAR techniques and different software was presented.

On 28th и 29th of July, 2011 г. in Thessaloniki, Greece, Aristotle University was held a technical meeting between the partners from the international consortium of Core Information Service - Spatial Planning (part of Geoland 2 FP7 Project) financed by the 7-th Framework Program. ReSAC took place in meeting as a partner in the consortium. The main objectives of the meeting were:

The INSPIRE Conference 2011 took place from 27th June to 1st July 2011 in Edinburgh, Scotland. The theme of this year's edition was "INSPIRE by 2020 - Contributing to smart, sustainable and inclusive growth" .

In 2010, the European Union renewed its commitment to 'knowledge-based' sustainable development by putting forward three mutually reinforcing priorities in the Europe 2020 Strategy1:

This edition of the INSPIRE Conference offers an opportunity to explore INSPIRE's contribution to Europe's 2020 strategic goals and to root its further implementation and development in the EU 2020 follow-up programmes:

In addition to these 3 exploratory chapters, the INSPIRE Conference examined and reported on the progress being made in the development and implementation of INSPIRE Directive and Implementing Rules.

A common presentation was prepared by the side of experts from ReSAC, Agency for Sustainable Development and Eurointegration – ASDE and an Executive Agency “Electronic Communication Networks and Information Systems on “Bulgarian contribution to INSPIRE implementation”.

On 8th and 9th of June, 2011 in Kaunas, Lithuania technical meeting between the partners from the international consortium of SATChMo (part of Geoland2 FP7 Project) was performed. The Remote Sensing Application Center - ReSAC, as partner in the consortium participated with presentation on land cover change detection products validation.

SATChMo will provide maps and data on land cover for selected samples of the European territory. The aim is to deliver statistics for the trends and changes in land cover. In order to validate the products ReSAC will use modified methodology of JRC for Quality Assurance of LPIS.

On 16 and 17 of March 2011, in Baden, Austria was held kick-off meeting of partners in general consortium, one of which is the Remote Sensing Application Center - ReSAC, of the project financed by the 7-th Framework Program - HELM: Harmonised European Land Monitoring.

HELM is a Coordination Action which has responded to the call FP7-Space 2010.1.1-06, Coordination of national activities for land monitoring in the frame of the program for Global Monitoring for Environment and Security – GMES. HELM has started in January 2011. The project website www.FP7HELM.eu will be online soon.

ReSAC – Partner in the Organization of the COSMOS Matchmaking Event, Sofia, Bulgaria, 18th of March 2011

On 18th of March 2011 the National FP7 Space Contact Points network COSMOS is offering a matchmaking event related with the upcoming 5th Space call of FP7. The event is organized in the frame of the 2nd Earth Observation-GMES Operational Capacity Workshop and is supported by the Bulgarian Information Office for GMES (BIOG).

The main objective of the matchmaking event is to create an opportunity for R&D institutes, universities, SMEs, industry and other organizations working in the field of Space: GMES Service and Space Component. Interested organizations can present proposal ideas, their competencies or their field of work via posters and oral presentations. This aims at identifying common interest with other players and thus finally at submitting joint proposals under the next FP7 Space call.

All the presentations and posters will be published on the Bulgarian Information Office for GMES (BIOG) website as well as on the NCP network COSMOS website after approval by the authors. We are looking forward to welcome you in the COSMOS Matchmaking Event - Bulgaria 2011.

The agenda of the event can be found here, and you can register for the event here. For more information, please contact Vassil Vassilev (FP7 NCP Space – Bulgaria): This email address is being protected from spambots. You need JavaScript enabled to view it.

On 17 and 18 of January 2011, in Graz, Austria was held kick-off meeting of partners in international consortium, one of which is the Center ReSAC, of the project financed by the 7-th Framework Program. EUFODOS: "European Forest Downstream Services - Improved Information on Forest Structure and Damages". ReSAC is leading one of the Work Packages – User Requirements. Bulgarian user is the Executive Forest Agency to the Ministry of Agriculture and Foods.

The main goal of the project is development of downstream services for better forests management, oriented to the users of the program for Global Monitoring of Environment and Security – GMES. The meeting was the real start of the project. The participants in the meeting were representatives of partners in the consortium, consisting of six partners, service providers, one of which is ReSAC, and seven users

More information on the project can be found here.